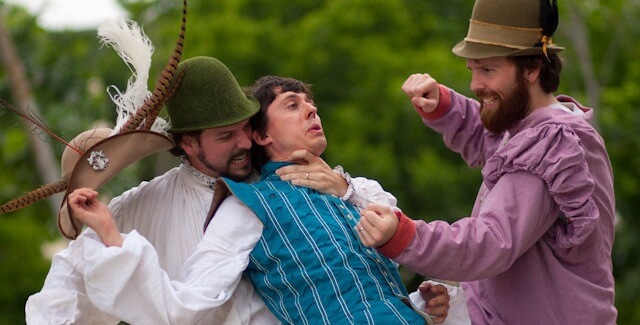 There are numerous examples of artistic partnerships in the theatre: Audrey Hepburn and Spencer Tracy in drama; and comedy routines by the likes of Laurel and Hardy or Jerry Lewis and Dean Martin.

Round Rock has its own powerful acting partnership – Ryan Crowder and Nathan Jerkins. They first met as college students at Abilene Christian University and fate would bring them to Round Rock where Crowder and Jerkins would co-found The Penfold Theatre Company, Round Rock’s first and only professional live theatre.

“Penfold Theatre brings Round Rock arts patrons a professional and enjoyable time at the theatre. The city is fortunate to have a group that provides theatrical entertainment,” said Scot Wilkinson, Executive Director for the Arts at the City of Round Rock. “Nathan and Ryan are both creative and bright individuals helping build the arts scene in the city.”

They almost never became a team. Ryan Crowder had moved to Ohio and was pursuing his masters degree when a mutual friend Sean Martin called. He had an idea for a theatre in Nashville, but Nathan Jerkins thought Central Texas might be better. The trio set out on a road trip across the central United States and brought home a vision for professional theatre in the growing communities in north Travis and Williamson counties. Crowder and Jerkins founded Penfold in June 2007 along with Sean Martin.

“Working with Ryan has been great,” said Jerkins. “That’s why we’re still working together for over decade. He is thoughtful and meticulous, bringing the same care to our organizational inner works as he does to our productions. We’ve been able to keep each other focused on our audience and shared vision.”

“Nathan is a visionary. He’s always bringing the big ideas to our company meetings,” said Ryan Crowder. “He had done a lot of research and discovered that Round Rock was putting together a master plan for the arts. We met with Cathy Kincaid who was leading Round Rock Arts at that time and others from the city. We decided to make Round Rock our home for the theatre.”

“Our artistic collaborations have always been built on mutual respect even when we have differences. Any show or design concept that can make us both happy is likely a solid one. It has forced each of us to make better choices knowing that we’ll have to justify them later,” Jerkins added.

In its first nine seasons, Penfold produced 29 plays and 11 special events, which together garnered 114 local awards and honors, including Austin Critics Table Award for Best Musical (two years in a row), Austin Critics Table, and B. Iden Payne Awards for Best Actor and several years in the Austin Chronicle’s Top 10 lists.

“Live theatre lets you be part of the story that is unfolding in front of you. It’s engaging. It’s emotional. It’s entertaining,” said Wilkinson.

Penfold is organized as a nonprofit dedicated to cultivating a love for live theatre by providing professional theatre performances and education programs. Their mission is to empower artists to create work of the highest caliber and to engage diverse audiences through stories that inspire and impact our community. Every year, the company offers an annual season of plays and musicals, multiple special events, a series of murder mysteries aboard the Austin Steam Train and summer camps for ages 6 to 13.

Ryan Crowder is not only the Producing Artistic Director of the company, but an actor and director as well. In addition to his directing and performances with Penfold, Crowder has appeared in Hidden Room Theatre, Austin Shakespeare, Austin Playhouse, Cincinnati Playhouse in the Park, Pittsburgh Irish & Classical Theatre and the Monomoy Theatre on Cape Cod. For his work onstage, Ryan has received the Austin Critics Table and B. Iden Payne Awards. He holds a Master of Fine Arts from the Professional Actor Training Program at Ohio University, a Bachelor of Fine Arts degree from Abilene Christian University along with a certificate from the Denver Center of the Performing Arts.

Nathan Jerkins‘ official title is Associate Artistic Director at Penfold but he’s also an actor and author. Before moving to Austin, Nathan was a founding member of the Itinerate Theatre Company, which served the Abilene and Dallas areas. Now, besides acting and directing regularly for Penfold, Nathan appears on many Austin stages – including Hidden Room Theatre, Austin Shakespeare, City Theatre and others – for which he has received multiple awards and honors. Nathan has also authored several live radio scripts, one of which is currently produced around the country. He also holds a Bachelor of Fine Arts from Abiline Christian University.

“Being the first has meant that we’re putting down roots in a place that didn’t have the built-in infrastructure for the arts that other places might have, “said Nathan Jerkins. “We’ve had to add the additional effort on trying to develop our audience and donor bases, but we’ve long been convinced that Round Rock’s future is worth investing in.” 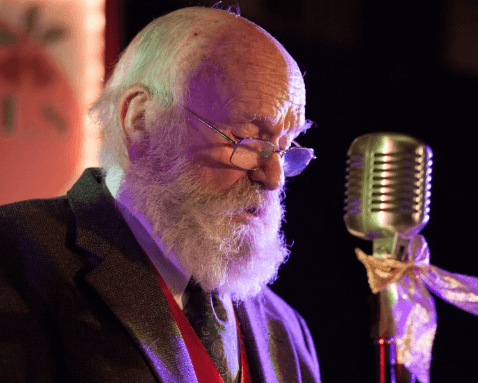 The players at the fictional KPNF radio station return to put their stamp on another holiday classic – Miracle on 34th Street. As they bring to life the entire story through dozens of character voices and live foley sound effects, you’ll be re-introduced to Kris Kringle, the charming Macy’s mascot put on trial for claiming to be real Santa Claus. Besieged by commercialism and disillusionment, winning the trial and restoring his friends’ faith in the most precious, intangible parts of Christmas will require Kris to perform nothing short of a miracle!

** All photos are re-published courtesy of the Penfold Theatre Company and Discover Round Rock claims no credit or copyright. **

Round Rock Homes for Sale